They come. They always do. The sea brings them to me. Swallows them up and swishes them from cheek to cheek before spitting them just shy of my shore. The only haven in sight for miles. Mama used to say with a smile. Any port in a storm, my little minnow.

I didn’t understand, at the time, why she smiled so widely nor why it prickled me so. There was an…edge, to her grin. Something cutting in its curl. Sharp. It wouldn’t occur to me why until many years later and many more ships spat ashore. Too much teeth.

I have always called this lonely speck of misbegotten rock in the middle of this surly grey sea home. The only watchful gaze I knew better than Mama’s was that of the storm’s. Mama hated when those stormy eyes found us. Hated that moment of calm that would fall when an eye settled on us. It’s the only time she ever spit back at the sea.

Any port only works if there’s a storm, after all.

Even many years after her death, Mama’s teeth still gleam in my mind. Too much. Too many. Like those odd fish that sometimes washed up with the ships and sailors, dragged up from the darkest depths, jaws jagged with needle-point teeth. Yes, just like those fish. They were almost always dead by the time their broken bodies caught on our craggy shore, not made to thrive in the unforgiving world above.

Mama died on a stormy night like this one. Wind howling across the isle, rain biting skin, battering this sliver of world we call home. A ship skid on the horizon, sails slanted, desperately trying to prevail and failing.

On the sea, a strong gale tears through the ship’s sails and its bow sinks low, probably taking on water, same as every other ship lured from its course into our waters. Overheard, thunder beats the sky from blue to black. The faintest of screams begins to join the clamor. Those sailors will be screaming on my shore before the candle in my cabin has the chance to burn halfway. They will die before the light does.

In my memory, Mama’s eyes burn. More like lightning than any candle, so striking and yet so fleeting. They only burned like that when she reeled in the night’s catch. When she gutted bellies, pulled out innards, dyed the sands of our little shore and the long hems of our pilfered muslin dresses a deep, dark red. Anything we couldn’t use, she’d toss back into the sea. Like those odd fish. An offering, she called it.

I guess she believed us blessed.

Foolish, she said that night, licking her teeth clean. To think they can own her. Control her. Storms belong to no one, my little minnow. Remember.

The wave that swallowed her flopped over the rocky lip of our shore like a large, languid tongue. It slammed her almost casually into the rocks, jagged edges tearing through fabric and flesh, red bleeding in between the points. She screamed, I remember. A piercing sound. My little minnow! But, I wasn’t so little anymore. Neither were my teeth. Or, my appetite.

Saliva flooded my mouth and blood thundered in my ears and I remember wondering at the storm brewing inside me.

I caught the eye of the storm. It was nearly overhead. Mama never liked her gaze. Mama spat in her face and threw her our leftovers. Foolish.

I let the sea have her, the last leftover.

Now, I watch as the ship sinks even lower, draws ever nearer my shore. Once faint screams now overtake the winds’ howling. Thunder and blood thump in my ears. A smile with far too many teeth cuts across my face.

Storms belong to no one. 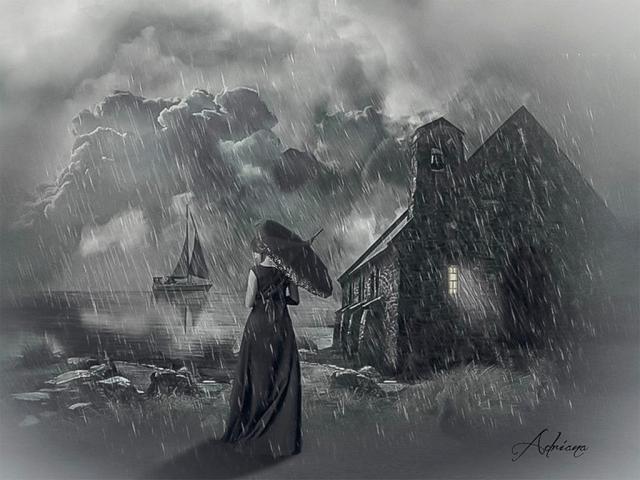 I joined the Writers Circle at my library! This week, the group write stories based upon this picture prompt! I thought is was a very inspiring work and I wrote a story that I am quite happy with! I hope you enjoyed this little taste of horror! Definitely look forward to more!